The exhibition “defining the elemental is an exhibition of painting in the UK.

The exhibition “defining the elemental is an exhibition of painting in the UK. The ten artists participating are showing authentic work that covers contemporary landscape, portraits and new abstract painting. The extensive venue is the Crossley Gallery which is within the extremely large Dean Clough business  and culture complex in Halifax, West Yorkshire.

The exhibition began in October and ran through to 12th January 2019.
Many of the artists were renown throughout the North of England and beyond for their progressive, dynamic, semi-realist and abstract new work, such as, Denis Taylor, Ian Norris and Jeanette Barnes along with major project painters such as Shaun Smyth and original impasto styled (inspired by Kossoff/Auerbach) portraiture work  created by Richard Fitton and Barry De Moore.

extract from the review in the magazine….

This is a show that has ten painters and writer who has created poems for the works on exhibition at the Crossley Gallery venue inside the expansive Dean Clough complex.

In the introduction David Traves points out the inspiation of British 20th century painters such as David Bomberg, Leon Kossof and Frank Auerbach, that some of the participating artists may have been inspired by, although that is referring to paint application, more than it is to the subjects.

The selected the group of artists was mostly chosen by Shaun Smyth.

The original concept and title for the exhibition. “Defining the Elemental” was his original idea and it conjures up a whole range of meanings behind it. Essentially the artwork to be shown is primarly based in nature subject matter, although one or two of the artists have expanded that to include the human figure and pure abstraction, work that perhaps have broader and more expansive meaning, as far as the human race is concerned. i.e. “initium aquam”  (Latin: Life began in Water) by Denis Taylor and “Rebuilding ground zero” by Jeanette Barnes. Richard Fitton, another fine painter, shows some new work, one in particular that is removed away from the impasto paintings he is known for, to a more delicate surface finish and his growing concern for the drawing content in his creative output (e.g: “Amy” mixed media- on loan from a private collector). Ian Norris exhibits his highly developed semi-abstract work with his accomplished and fabulous handling of paint, work that is always backed up by dedicated charcoal sketch works. 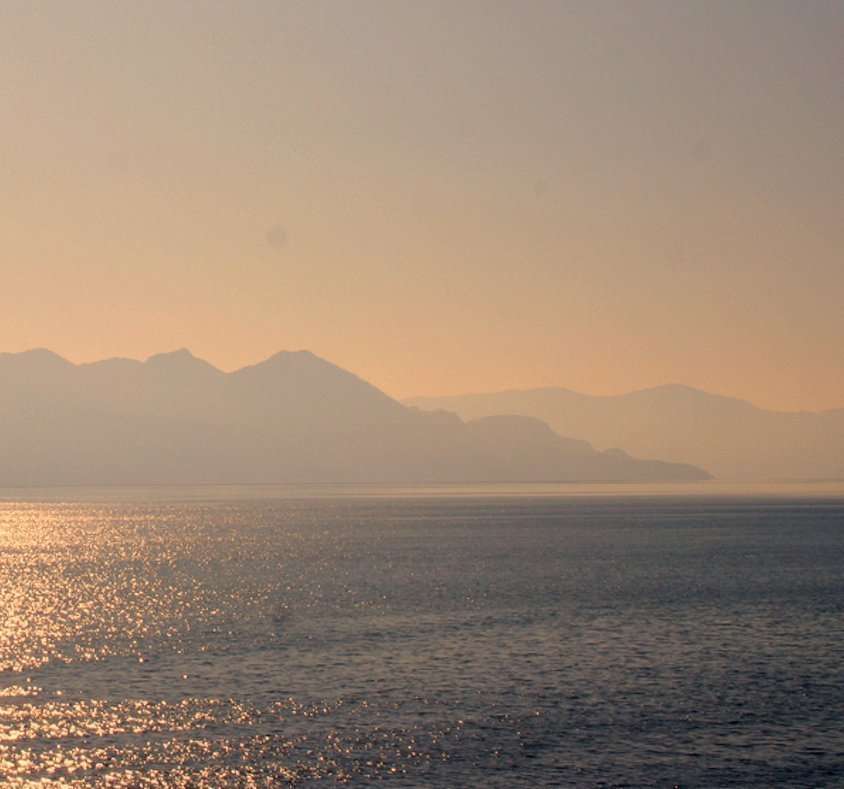 …way back in 1986, I decided to become a full time artist (painter). At least painting full time when it was possible. My self imposed rule #1 – was “to live for Art, and not live off Art.” – which sort of boxed me in, as I still needed to earn a living. This I did by working in a variety of jobs, writing articles and catalogues and selling the occasional canvas to interested parties, or taking on commissions, but only when someone asked me.
Somehow, years later, I found myself ensconced on island called Aegina. The island is close to Piraeus (19 kilometers) and thus Athens, where I could buy (piecemeal) oil paint, when I had the money, for Art supplies that is. It was here that I confronted the age old enemy of creatives – Ego – And it was here that I defeated it, albeit with the help of an invisible helping hand, which many people call their God. Unlike my home in Northern Europe, the Greek belief system was strong, and it would be unnatural for any creative not to absorb the atmosphere that surrounds them. The outcome was work which, up to then, I had never envisaged painting. This was linked to an incident, one that is too long to explain here, but let me just say, a miracle occurred that saved my life.

Time passed and my collection of paintings grew. Eventually I met my future wife, on another island, where I had accepted a commission to paint ‘Walls’ for a Greek friend who was setting up a ‘Rock and Roll cafe on Anti-Paros, a very small island in the Cyclandic’s. This chance meeting led to a Gallery exhibition in Stockholm (1995) and another one in the same year, before I knew where I was I had several shows, created a ‘radical’ group of mixed media Artists and curated, designed and participated in three major exhibitions, one of which was a commissioned [non paying] job for the Swedish Government Estonia Trust Fund and the International  Support Group, that one took over four years to complete [sic: Heart 2 Art- Stockholm January 2002]. And all the time, keeping to my #1 artists rule, I was earning a living doing other things [in the UK] remotely or directly.
Almost twenty years later, and now an artist in the Grey hair sector, I and my wife could scrape together enough time and money to spend a month on Aegina [July 2018]. And, as luck would have it, we were able to take my ‘Greek-Niece’ up on her kind offer to stay at her family home – which just happens to be above my old studio from all those decades ago. Hence the ‘time travel’ headline of this post.

The studio had not been lived in or attended to for some years (my niece no longer lives there) And nature had began to take the place over. I resolved to spend the cooler mornings and late evenings bringing the place into ship shape. Mainly because I couldn’t bare to see it in that condition, and I wanted to ‘feel’ what I felt when I was a much younger artist, how I’d grown and developed in comparison, which was insightful. I recalled every single canvas I had painted there, in that place, the struggles, the ecstasy of a breakthrough and the disappointment of failure. I remembered the people, those characters who became more than close friends, now most of them, passed to the other side. At the back of the house I found my white plastic chair, and another for visitors, who would sit with me to discuss the painting I would have been currently working on.
I was time travelling, inside my mind, as I doggedly swept and moped, and swept and moped again and fought the weeds that had embedded themselves in ever crack and cranny. My human form bled salty water from every pore in its body, to cool itself down, but my mind was far to busy ‘travelling back in time’ to take any heed or warning to rest up and drink water.
At the end of all this, my voyage ended with a realisation of what I had actually achieved in Art per se, despite my rule #1, or because of it – And a truly personal sadness, that I could not share with them, that their high expectations, ones they were convinced that I could achieve in Art, had been.
So, ‘Time Travel’ is not easy – for many reasons – but I am sure it’s a trip everyone takes at some point in their life, the good, the bad, the tears the happiness. That’s what it’s all about, isn’t it?

posted and written by Denis Taylor. Artist and Writer.

The Editor of TUbes has his own personal pages. Here he posts extracts from his book – “Protos Loophole” – The book is broken into ‘Parts’ currently on part Six – you can catch uyp th the story by clicking the links on the following url: Denis Taylor Artists website

There are also some examples of the Editors paintings from 1983 onwards.